Home  »  Electronics • Recommended • Tools   »   A Volcano Stranded me in Shanghai: How to survive the unexpected 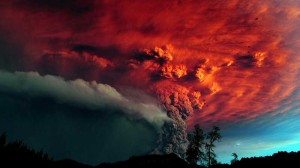 When the unpronounceable volcano in Iceland exploded, Europe was left coughing in a plume of smoke that grounded every flight for days. I was in India on that day. Coincidentally on the way to the airport to finally haul this exhausted carcass back to America. By way of Germany. Or, suddenly, not.

The instant that mountain blew its top, everyone with a lick of sense was on the phone rerouting their flights to the few that were left. Me? I was deep in the countryside with no internet, news, or even a carrier pigeon. By the time the news got to me, that hazy happiness of returning home was shattered by the realization that I was stuck until Mother Nature’s mood swings calmed down.

Being the stubborn person I am, and with nothing else to do, I started calling around to see if there were any other options. After an hour of rejections, there was finally one small flight going the other way around the world, through Shanghai, that would get me back to my soft bed at home.

Giddy off the fact that I had outsmarted nature, I had a self-satisfied grin all the way to my seat on the airplane, where sleep quickly brought dreams of western food. Rustled awake by the landing in Shanghai, I quickly packed up. The layover was so short that there was no way to make it unless I ran, and there was no way I was going to miss it. 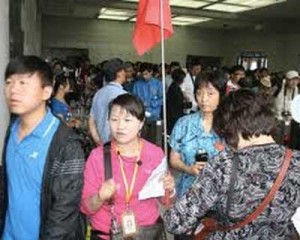 Emerging from the depths of the umbilical cord attaching the plane to the mother airport, it was a relief to see an airline representative holding a sign with the connecting flight information. They were going to make sure we got there on time. Yes!

Our little herd of passengers milled about with nervous energy as we waited for the last of the flock to emerge. The newfound leader dutifully held her tiny flag above her head and started marching us to our destination.

Down through the baggage claim.

Where we stood and waited for a few minutes.

We we quickly becoming a fidgety mob, not wanting to miss our flight. We were also unable to communicate with our glorious leader, as she only spoke Mandarin. We started collecting information amongst ourselves, figuring out what everyone else knew. Finally we found someone who spoke some Mandarin, and they opened up the lines of communication. We were ecstatic.

For one glorious moment.

There was no flight. We were stuck in Shanghai until the next flight left in 24 hours. America shall not be had today. Suddenly stranded in Shanghai, we scuttled around looking for hotels. Thankfully, there was only one small bag for me to worry about.

Once we found a hotel, people starting coming to the realization that their electronics were dead from the long flight, and they only had converters for the countries where they were supposed to be traveling. They wouldn’t be able to tell their friends and family why they weren’t at the airport, or even that they were safe.

That’s when I became the most popular person in the hotel. 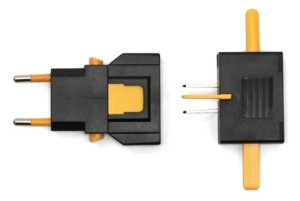 Packed away in my luggage is the single best converter in existence. Most converters only go one direction, from one country to a few other countries. This amazing piece of technology can convert from any country to any other country in the world, so everyone was able to use it with everything they had.

Unlike those massive can-of-beans-sized ones out there, this is the smallest in the world, thinner than a pack of cards, so it’s always handy. Plus the pieces all slide around like a Transformers toy, delighting the geeky little boy inside me.

We stayed up for a while, sharing stories as people contacted their loved ones back home to let them know what was going on, and I wrote down the name of this adapter more times than I could count for others to buy when they got home. It’s nice to know that next time, they will be ready for the unexpected adventures travel can throw at you.

Get it now on Amazon
FREE: The complete CEO packing list

Enter your name and email below to get: