While traveling the world, you are going to encounter a lot of people with a wide range of computers. From huge towers stashed away in back rooms to microscopic laptops on the streets of Tokyo, you will have a lot of friends that you want to share photos and videos of adventures with. Make sure you can get information from anyone, at any time.

The coolest USB drive on the planet 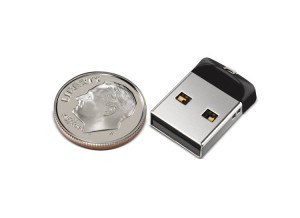 I’m going to cut right to the chase here. The Sandisk Cruzer Fit is the smallest USB drive on the planet. It’s basically just a USB plug with enough sticking out that you can grab it with your fingertips. You can leave it in your computer all the time and never worry about damage. Somehow it’s speedy and has tons of space, all in the tiniest package in the world.

Finally a drive that kills all of the usual frustrations of dealing with those cumbersome USB drives people keep rattling around in their bags.

Blocking the ports next to them

Not having enough storage

Not fitting in that strange computer

This sleek little number makes you feel like a spy, sharing information quickly on a little black device smaller than your thumbnail. The 32GB version is big enough to hold 45 movies, 2,000 songs, or a year’s worth of photos. If you are a geek like me, you can stash an entire other computer on there with another operating system, then slide it back in its little case and put it in your pocket with your change.

Be prepared for amazed looks as nobody believes technology has come this far. I picked mine up a year ago at a black market in China, but now you can get them on Amazon for under twenty bucks. It’s a steal for one of the coolest and most useful things in the world.