Inside my tiny backpack, space is precious. Every little thing takes up space that something more vital could be using. So why am I about to tell you about a speaker? Because it’s just the most amazing speaker I’ve discovered, and it deserves that space.

The way I discovered this little powerhouse was at South By Southwest one year, visiting various friends. Walking to a DJ’s room, I heard the music long before I was there. Inside there was a large crowd dancing to some bass-filled music, yet no sound system that was filling up the room could be found. When asked where it was, and he simply held up his Jambox in one hand while continuing to DJ with the other. 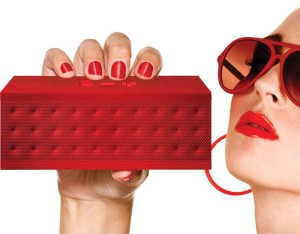 Every portable speaker you’ve likely heard before has been painfully tinny and quiet. Speakers this small never do something that impressive, and that’s only where its strengths begin. It’s fully bluetooth-capable and cordless, which means when you go to the park with friends, changing who is in control of the music is as simple as them pressing a button on their phone and playing the music they already have. No hassle, just awesome, relaxed fun for everyone.

Personally, I use the Jambox all the time.

Watching movies with friends, without straining to hear the tinny laptop speakers

Having speakerphone calls you can easily hear

Filling up an apartment with music while getting work done

The only caution is that it can be too powerful. I have gotten noise complaints when the volume was only set to about 50%, which is honestly just impressive. Once you are done using it, there is even an ultraslim case it slides into and packs away in a corner of your bag for next time. If you aren’t as much of a lightweight traveler, there is even a Big Jambox that the DJ friend above has upgraded to, and is even more impressive, though not necessary for most people.

Honestly, you are either already impressed by how strong and versatile such a tiny speaker is, or you would rather spend your money on a towel. If you are the former, do yourself a favor now and be impressed at how far technology has come. The next time you are relaxed watching a movie on the road without straining to hear those little laptop speakers, trying to figure out what people are saying, you will be fully converted.